What are Eastern subterranean termites?

Eastern subterranean termites are a destructive wood-destroying insect commonly found in every part of the country except the northernmost states where cold temperatures keep them from swarming. Subterranean termites are social insects that live underground in large colonies with populations that can number into the millions. Termite colonies are managed by a queen that lays huge egg clusters. Immature termites, called nymphs, hatch from these eggs before developing into one of three castes: worker, soldier, or reproductive. 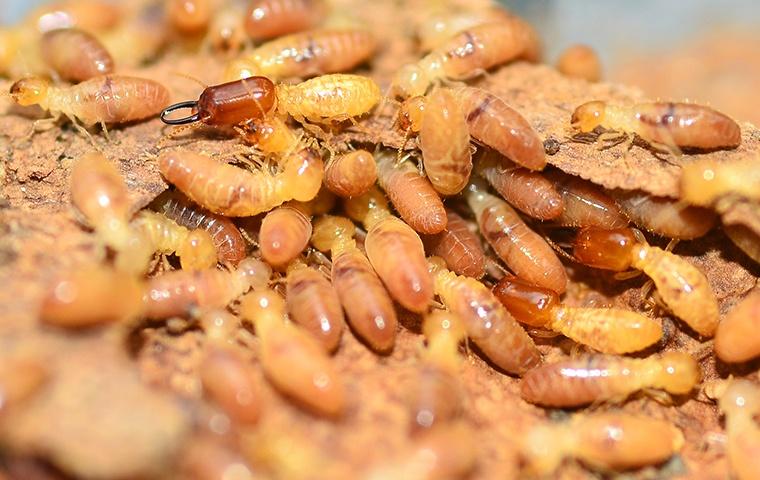 Worker termites are creamy white in color. These termites carry out the day-to-day operations necessary to keep the colony alive and thriving, namely tunneling through wood or carbon-based items and structures in order to bring back cellulose for consumption by the colony. They also maintain the termite nests and mud tubes that they use to get around.

Soldier termites are brownish-yellow in color and are recognizable by their elongated yellow heads and large jaws. As their name indicates, soldier termites use their jaws to defend the colony and fight off other intruders (such as ants) that might try to attack workers or steal eggs.

Reproductive termites are dark brown or black in coloration and sprout two pairs of translucent wings. Every spring, these termites pair off in mating flights and head off in separate directions away from their home colony to create their own colonies, becoming the new kings and queens in the process. Their wings break off after their mating flight, and these discarded wings are often the first indication to homeowners that they have a termite problem. The queen secretes pheromones to control the development of her nymphs and ensure the colony has enough members of each caste to meet the needs of the colony.

Subterranean termites do not bite, sting, or carry any diseases to humans. However, while they do not harm humans directly, they can cause stress and anxiety as they destroy homes. As they destroy wooden structures, they create hazards as they eat through support beams, destroy electrical wiring, and leave other parts of the home vulnerable to collapse.

Why do I have an Eastern subterranean termite problem?

Termites feed on cellulose, which can be found in wood, leaves, and soil. Typically, termites that get into homes were first attracted to the wood inside the home’s walls and foundations. This species of termite prefers to eat moist or water-damaged wood, so an existing moisture or leakage problem around your home could be all it takes to invite an infestation; however, even structurally-sound properties with no moisture problems can still find themselves with termites. Termite swarms can happen almost anywhere, and if your home or business happens to be nearby, getting an infestation may simply be a case of bad luck.

How do I get rid of Eastern subterranean termites?

Unfortunately, there is no realistic way for the average home or business owner to completely treat their termite problem and keep it from coming back without help from an experienced professional. Termites are notoriously difficult to eliminate and require the use of advanced treatment systems that you can't purchase or apply without a license. Furthermore, fixing the damage they leave behind often requires the help of an experienced carpenter.

In the end, it's best to utilize preventative measures to avoid a termite problem altogether. Though there are effective ways to react to an infestation, they are certainly more challenging than avoiding one in the first place. Contact us today for information about how the termite experts at Pestmaster® Services can keep your home or business protected from termites.